Straight through rubber lined diaphragm valve is suitable for non corrosive or general corrosive media. The inner surface of valve body is unlined or covered with optional rubber. It is suitable for different working temperatures and fluid pipelines. Applicable temperature: ≤ 85 ℃, ≤ 100 ℃, ≤ 120 ℃, ≤ 150 ℃ (according to lining and diaphragm material)

How Does Straight Through Diaphragm Valve Work 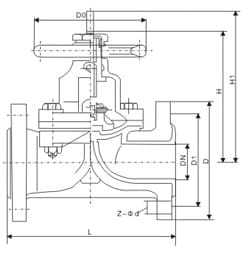 Full channel valves are mostly used in beverage industry. It can be cleaned with a ball brush with steam or caustic soda without opening or removing the valve from the line.

1. The opening and closing parts of elastic seal ensure no internal leakage;
2. The streamline flow channel makes the pressure loss small;
3. There is no stuffing box, so there is no leakage;
4. The valve body and the cover are separated by the middle diaphragm, so that the valve cover, stem and other parts above the diaphragm are not eroded by the medium;
5. The diaphragm can be replaced and the maintenance cost is low;
6. The variety of lining materials can be applied to all kinds of media, and has the characteristics of high strength and good corrosion resistance.

Send us a message if you have any questions or request a quote. Our experts will give you a reply within 24 hours and help you select the right diaphragm valve you want.